Select an object below or continue by clicking the button or scrolling down the page to explore the coinage selection. ​Click the back button in your browser or the up arrow on the side of the page to return to this menu.
Explore

On the obverse of the silver tetradrachm is Alexander the Great in the guise of Herakles. The iconography embodies the king’s desire to be viewed as divine at the height of his power. The iconic lion headpiece is a symbol of the great Greek hero Herakles. Alexander the Great wears the Nemean Lion pelt while also showing his own classic features of a strong nose and jaw, and flowing locks.

​​There is no solid proof that this depicts Alexander because the face is idealized. It is reasonable to assume that this was merely a depiction of the mythological hero rather than an actual portrayal of Alexander. [2] Herakles was still a symbol of Alexander that could have represented or stood for the king. On the reverse is bearded Zeus enthroned and holding a scepter. An eagle is perched on his other outstretched arm. These are common attributes of the supreme god Zeus, who was Herakles’ father. The inscription ΑΛΕΞΑΝΔΡΟΥ translates to the name "Alexander." This combination of obverse and reverse motifs was a very common type and can be seen repeated on coinage of this period.

Alexander the Great, also known as Alexander III of Macedon, lived from July 21, 356 BCE to June, 323 BCE. He was the son of King Philip II of Macedon and took power as the king of Macedonia after his father’s murder in 336 BCE. Macedonia is located in the northeastern region of modern day Greece. Alexander the Great is most famous for his domination over the Persian Empire and for his mastery of both military and diplomatic skills. He expanded his empire across the Middle East, all the way into modern-day India, and into Egypt Through his countless victories, Alexander the Great became a legendary figure for generations to come and looked to mythological characters as comparisons to himself in terms of their achievements and how they acquired divine status. Alexander’s divine persona was reflected in coins and he established a new silver coinage standard based on Athenian currency. [4] 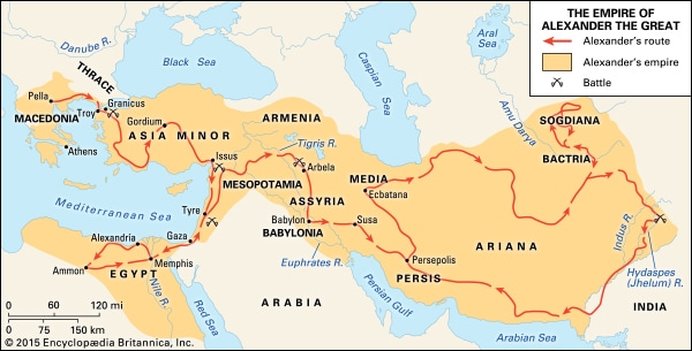 Alexander the Great: empire, “Alexander the Great’s conquests freed the West from the menace of Persian rule and spread Greek civilization and culture into Asia and Egypt. His vast empire stretched east into India,” Encyclopædia Britannica
The history of Greek coinage can be divided into three parts. The earliest, the Archaic period, spans the introduction of coinage in Asia Minor sometime in the seventh century BCE to the end of the Greco-Persian Wars in 479 BCE. [5] The Greeks moved from coins made of an alloy of gold and silver, known as electrum, to separate coinage made individually of silver and of gold. The gold stater and silver siglos were the first international currency prior to the introduction of the Persian gold daric and silver siglos at the end of the sixth century BCE. [6] Individual city-states throughout the Aegean began minting their own coins with mythological figures and divine personifications of their cities. The Classical period, lasted from 479 to 336 BCE. The Athenian silver coin, tetradrachm, was the dominant international currency. [7] The artistry behind these coins began to be more diverse and intricate and plain coin punches were replaced with intricately carved coin dies. The age of Alexander the Great brought forth the third period known as the Hellenistic age, from around 336 to 31 BCE. A melding of Greek and non-Greek cultures took place and the “standard Alexander tetradrachm,” took the place of local coinage. [8] Those who traded with this currency knew it would be of a standard weight because it needed to be approved by city officials. Ultimately this unification came to an end after Alexander’s death and different coin types arose again.

The manufacture of coins in the Greek world was a process that was popular throughout the Mediterranean and went relatively unchanged into the Roman period. The use of standardized dies and round pieces of metal called blanks were common practice. Blanks were struck with dies to imprint the image on the coin's obverse and reverse. Below is a video depicting this process. It is also very similar to that of the video for the Roman sestertius in the following section.

Roman, ca. 175 CE
"Whatever her reputation [...] the posthumous attitude of Faustina's widowed husband made it clear that, like her mother, she was to be an exemplum.”

Sestertius of Faustina the Younger by Emily Lankiewicz on Sketchfab

The bronze coin depicts the empress Faustina the Younger (Fuastina II) on the obverse in profile with her name, FAVSTINA AVGVSTA, inscribed along the border of the coin. Faustina the Younger is almost always depicted with a low chignon bun, a thin headband or headpiece, and draped clothing around her shoulders. Various coin types of Faustina the Younger were minted throughout her lifetime. The rarest are bronze medallions like this one. [1] 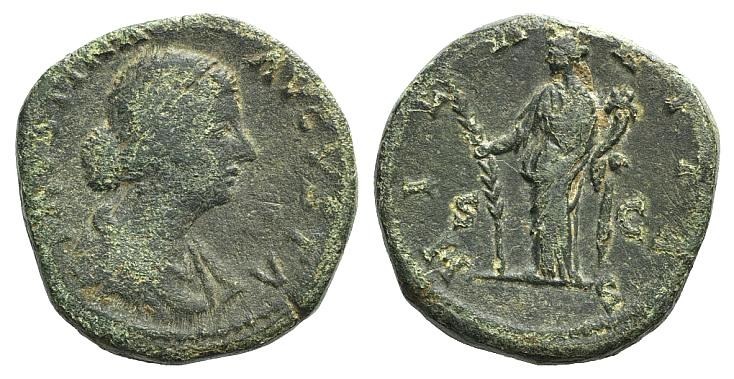 Faustina Junior coin, Roman, ca. 147-175 CE, green patina, CoinArchives
​On the reverse of Faustina the Younger coins, it is common to find a variety of female personifications of virtues and goddesses such as Juno, the queen goddess, Concordia, the goddess embodiment of marriage, and Pudicitia, the personification of modesty. On the reverse is Hilaritas, the Roman goddess of rejoicing. She is depicted holding a palm branch and a cornucopia, symbols of joy and abundance. Hilaritas appears on coins to celebrate the birth of an imperial child. [2] Around Hilaritas is HILARITAS inscribed. 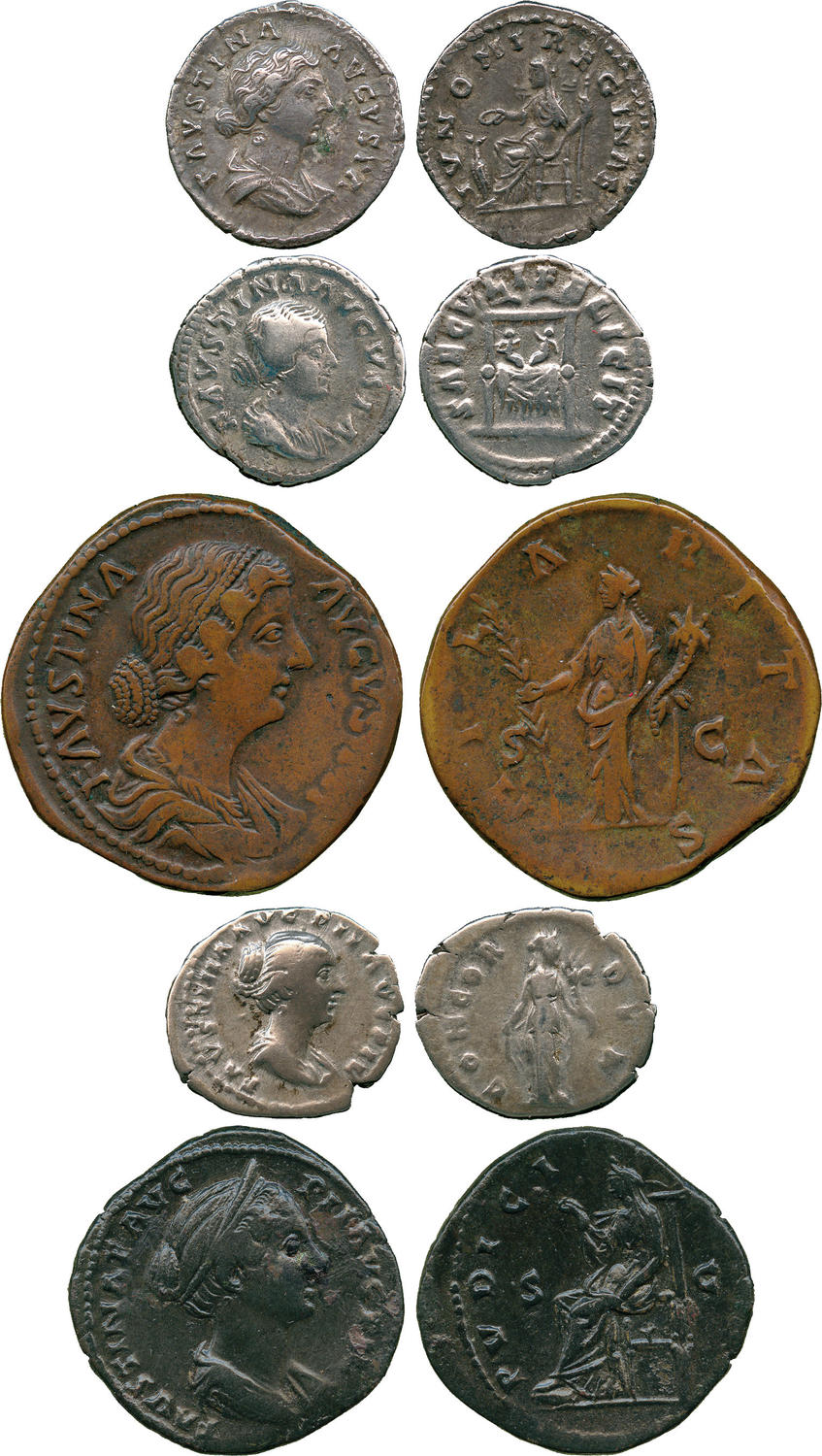 From 152 CE on she appears on coinage as Faustina Augusta. The title was a sign of independent status to a degree. Appearing on coinage had a lot of political advantages as a form of propaganda. Because of a woman's lack of power in this area, coins depicting women of the imperial family were intended to support imperial motivations and ideologies rather than for the woman's own personal purposes. [5]

​Roman coinage evolved over time. The earliest Roman coins were made from large irregular lumps of bronze. In the fourth century BCE, these were replaced by aes signatum, which were large cast ingots decorated with a limited number of motifs. In the middle of the third century BCE, the aes grave became the regional currency and coins were cast in several denominations including as, semis, triens, quadran, and uncia. Each had unique design and value. [6] Compared to other Roman coinage, a sestertius was often made of silver during the Roman Republic and then brass during the Roman Empire. [7] Over time these denominations decreased in weight. [8]

In 45 BCE Julius Casear became the first living Roman to place his portrait on coinage. This began a long tradition of ruler portraits on the obverse of coins that continued throughout the span of the empire and beyond. Emperors and members of the royal family were depicted on coinage in their own likeness while they were still living. The most popular depictions on the reverse of coins were the personification of virtues and gods and goddesses relating to the emperor and his dynasty. [9] Hadrian was the first emperor to give his wife a substantial presence on the obverses of coins. During the life of Antoninus Pius, the depiction of women, particularly Faustina the Elder and Faustina the Younger, increased substantially. [10]

Coinage was mass-produced with the help of standardized dies, small molds hammered on either side of the metal. The dies were struck onto circular metal pieces called blanks. Often dies were not properly aligned, making the obverse and reverse face in different directions. To save metal coins were re-worked and re-stamped on top of old designs. In an attempt to avoid counterfeiting, the process of making these coins properly was closely guarded. Below is a video outlining what scholars theorize is the process.
​

Chinese, ca. 718-732 CE
On Chinese coinage there is not a figure in sight, unlike the bulk of coins coming out of the Mediterranean. This emphasizes cultural differences and similarities. Though the emperor is not depicted, the characters on this coin speak volumes about who is in charge and when.

The bronze Kai Yuan tong bao (or Kaiyuan) coin has a teal patina, or film, due to age and wear. It is a round coin with a square hole in its center. On the obverse of the coin are four Chinese characters, one on each side of the square center. The reverse is mostly blank except for a small upturned crescent above the square hole.
The crescent shaped mark on the reverse of the coin appears on many versions of the Kai Yuan tong bao type. It is said that an imperial lady of the court, perhaps Empress Wende or Imperial Consort Yang accidentally struck one of her fingernails in a wax model of the coin when it was being presented to her. The mark was then retained and replicated. [3]

This coin is of the Middle Type, which is a coin type dating from 718 to 732 CE. It is defined by distinct vertical parallel lines in the bao character and the shoulders of the yuan character vary. [4] The calligraphy of the coin is in the Li Shu. Li script, the “official” or “clerkly” style. It is a simplified form of a seal script. [5]
​
​Kai Yuan tong bao coins that were made of lesser metals like copper or bronze would have been in circulation. Those cast in gold or silver would have been made during times of celebration and presented to the Tang court at births and royal weddings. These opulent coins were inspired by coinage brought over by Persian and Byzantine merchants. [6] The Kai Yuan was the main coin issued under during the Tang dynasty, a period of 300 years, and was in circulation centuries after the dynasty’s end. [7]

​The Tang dynasty, lasting from 618 to 906 CE was marked by successful diplomatic relationships and economic expansion with other neighboring cultures. The cosmopolitan cities of the Tang provided places of cultural interactions between merchants, envoys, and clerics from India, Persia, Arabia, Syria, Korea, Japan, and Byzantium. Multiple languages and foreign dialects were a common part of daily life in the capital city of Chang’an. [8] During the seventh century implementation of an official examination system enabled educated men without family connections to the court could serve as government officials. This new social elite gradually replaced the old aristocracy. [9] The eighth century is considered the classical or golden age of Chinese art and literature. [10]

Coin tree, Luke Roberts, UCSB Department of History
​​The sand in both frames would bear the impressions of the obverse and reverse of the coin. The mother coin was removed and then placed on top of the second frame and the process was repeated until there were up to fifteen layers of molds on top of each other, tightly bound. Channels of the metal to flow into the mold were made either individually or in groups of “tree coins” joined together. [11]​​​
​
Molten metal was poured into the molds, cooled, and then the coins were broken out of their groups and chiseled down. The coins were then threaded onto long square rods so that the rough edges could be filed away simultaneously for many coins at a time. Lastly the coins were polished in tubs of chaff or sand. [12]